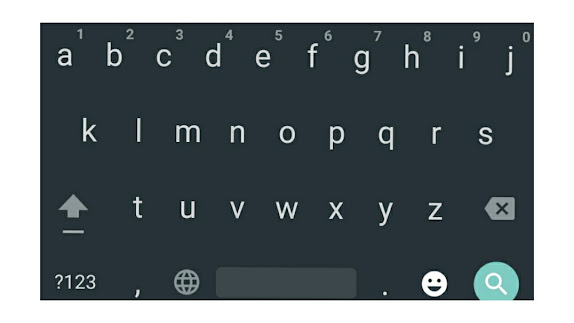 So today there is a crispy idea behind this new post. I am pretty or very fast in typing on my Android device using the QWERTY keyboard. While writing a message to one of my friends, I got stuck on an idea, "How does an ABC Keyboard look like?". Well, that is what you will know in this post.

There's an old legend about the QWERTY keyboard, dating back to at least 1977: It "probably would have been chosen if the objective was to find the least efficient...character arrangement."

In fact, the layout was designed to help people type faster.

The QWERTY layout is attributed to an American inventor named Christopher Latham Sholes, and it made its debut in its earliest form on July 1, 1874 -- 142 years ago today.

Sholes had been for some years developing the typewriter, filing a patent application in October 1867. However, the original key layout, with the second half of the alphabet in order on the top row and the first half in order on the bottom row, led to some problems. The keys were mounted on metal arms, which would jam if the keys were pressed in too rapid succession.

Sholes' solution was separating commonly used letter pairings, such as "ST," to avoid these jams, effectively allowing the typist to type faster, rather than slower.

He went through several design iterations, attempting to bring the typewriter to market. When he sold the design to Remington in 1873, the QWERTY layout looked like this:

Remington made several adjustments and launched the Sholes and Glidden typewriter on July 1, 1874. Its keyboard layout was almost the same QWERTY keyboard layout we use today, with a few minor differences. 1 and 0 were left out to help shave down production costs, on the basis that these numerals could be produced using other keys, such as a capital I and a capital O. Remington also swapped the R and . keys.

The 0 was added fairly early on, but some keyboards well into the 1970s were still missing a 1.

The first Remington typewriter sold poorly (it could only type in upper-case letters, was expensive at $125 per unit, and often broke). The updated Remington 2 typewriter, introduced in 1878, changed this. Not only did it remedy some of the defects of the Sholes and Glidden machine, the launch allowed Remington to sell the typewriter business to three former employees. Bringing marketing expertise to bear, the new Remington Standard Typewriter Company was able to bring the typewriter to commercial success.

Can You use an ABC Keyboard on your Android Device?

So, the answer is "Yes". You can still use an ABC layout keyboard on your Android device. Well, this might be a bit hard for you, since you and we all have practiced the QWERTY keyboard a lot. But, there is nothing bad in trying something new and Interesting. You can download this Virtual Keyboard Android Application from Google Play Store.
Let me know in the comments below, what your experience was, and are you thinking of replacing your old QWERTY keyboard with your new ABC keyboard?