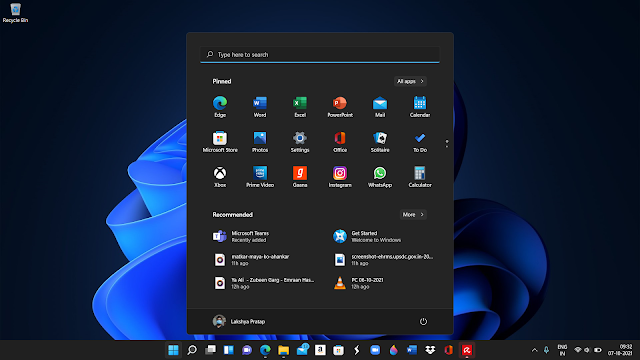 Microsoft says that it expects to begin shipping Windows 11 on Oct. 5 for new and existing PCs. The update will roll out in a measured and phased approach and will only be offered on existing PCs if they are eligible by meeting Windows 11's system requirements.

You can now see whether your PC meets the new minimum requirements for Windows 11. There are also some "hard" and "soft" requirements, including CPU types, leaving a lot of flexibility for which hardware can get Windows 11.

Microsoft allowed Windows Insiders to start testing the new operating system the week of June 28. Since then, it's released several Insider builds.

The minimum system requirements are as follows:
One of the biggest changes to Windows' system requirements with Windows 11 is that the OS is now only available on 64-bit processors. Microsoft is not releasing a 32-bit version of the OS, although 32-bit apps will continue to work just fine.

Windows 11 also requires a display size of at least 9 inches, meaning we won't be seeing any phones or mini 8-inch tablets with Windows 11. Microsoft has also increased the required drive storage to 64GB, up from 16GB with Windows 10. The same goes for RAM, being bumped from 2GB to 4GB.

Here are a few of the standout new features in Windows 11:
A new, more Mac-like interface.
Windows 11 features a clean design with rounded corners, pastel shades and a centered Start menu and Taskbar.
Integrated Android apps.
Android apps will be coming to Windows 11 and installable from within the new Microsoft Store via the Amazon Appstore. (There were a couple of ways to access Android apps on Windows 10, including if you had a Samsung Galaxy phone, but this will make it native. Note that Android apps will not be available upon the first release of Windows 11 in October.)
Widgets.
While they've been around for a while (remember desktop gadgets on Windows Vista?), including in a recent Windows 10 update, you can now access widgets directly from the Taskbar and personalize them to see whatever you'd like.
Microsoft Teams integration.
Teams is getting a face-lift and will be integrated directly into the Windows 11 Taskbar, making it easier to access (and a bit more like Apple's FaceTime). You'll be able to access Teams from Windows, Mac, Android or iOS.
Xbox tech for better gaming.
Windows 11 will get certain features found in Xbox consoles, like Auto HDR and DirectStorage, to improve gaming on your Windows PC.
Better virtual desktop support.
Windows 11 will let you set up virtual desktops in a way that's more similar to MacOS, toggling between multiple desktops for personal, work, school or gaming use. You can also change your wallpaper on each virtual desktop.
Easier transition from monitor to laptop, and better multitasking.
The new OS includes features called Snap Groups and Snap Layouts -- collections of the apps you're using at once that sit in the Taskbar, and can come up or be minimized at the same time for easier task switching. They also let you plug and unplug from a monitor more easily without losing where your open windows are located.

This article was devoted to Dr Shruti, one of our followers on Koo.